This week, the project manager in Perm, Asim Gurer, told us about what attracts construction industry specialists in cooperation with Limak Marash in a traditional interview with “LMS in persons”.

THE BASIS OF TEAMWORK IS COORDINATED AND HARMONIOUS INTERACTION

- I am currently in charge of the construction project of the Esplanade shopping center in Perm. The task of the general contractor, which has repeatedly confirmed its reputation as a reliable partner, is to fulfill its obligations accurately and on time, completing the first phase of the project in the fourth quarter of 2021. The manager is responsible for almost everything: from employees to subcontractors and customers of Limak Marash. The basis of our teamwork is the organization of coordinated and harmonious interaction between the company's departments and subcontractors.

Tell us what you do in the company Limak Marash, the direction of activity, functions, position.
How did you start your career in the construction industry?
Where did you work before Limak Marash? Tell us about your experience in previous projects.
What is the uniqueness of the processes specifically in your business?
How do you see the company's development? What are the prospects, in your opinion?

I WAS THINKING ABOUT CREATING THE LIVING SPACES OF MY DREAMS

- After graduating from the Faculty of Architecture at the university, I thought about creating the living spaces of my dreams: ergonomic and useful for people. My professional competencies have given me the opportunity to implement the ideas of famous architects and lead a team of specialists who implement significant projects.

FOR 23 YEARS WITH MY PARTICIPATION, PROJECTS HAVE BEEN IMPLEMENTED IN DIFFERENT COUNTRIES

- After graduating from the university, I worked in Turkey for a year and a half. Then, during two and a half years, my work continued in Turkmenistan and Kazakhstan: during this time, I participated in two projects. It was a period of work as a young specialist. Since 2004, life in Russia began: I moved on to the next stage, where I could take on more responsibility in important projects.

From 2004 to 2008, I worked for Renaissance Construction as the head of finishing works and the head of the site in six different cities.

In 2008 I joined the Marashstroy team: We have known the founders of the company since the days of Renaissance Construction. For six years, with my participation, projects have been implemented in different cities of Russia and Turkey. I worked in the central office and on the construction site: in the positions of deputy project manager, project manager, Deputy director.

The project of the Platov airport complex in Rostov-on-Don, implemented by the Limak Marash Group of companies in 2017, brought me back from Turkey to Russia. There was a great desire to gain professional experience in the construction of a large-scale infrastructure facility. This is how my professional career in airport construction began: in 4.5 years, we have completed four projects. After Platov where I was deputy project manager, I managed a project in Volgograd, then in Chelyabinsk (two projects have been implemented for the construction and reconstruction of terminals).

In total, my track record includes the construction of five shopping and entertainment centers (a sixth one is currently under construction), four airports, three office buildings, a factory, a hotel and many other facilities, as well as participation in the management and audit of projects in Turkey, Turkmenistan, Kazakhstan and Russia.

- In addition to the fact that it is necessary to ensure smooth and uninterrupted interaction between the company's departments, you need to monitor the development of technologies and be able to simplify or speed up the process on the site in order to get a better result.

- Having completed significant projects in a fairly short period of time, the Limak Marash brand, as a dynamically developing union of two well-known companies, has shown itself to be focused on success and growth. I think the prospects are great, which I am very happy about. 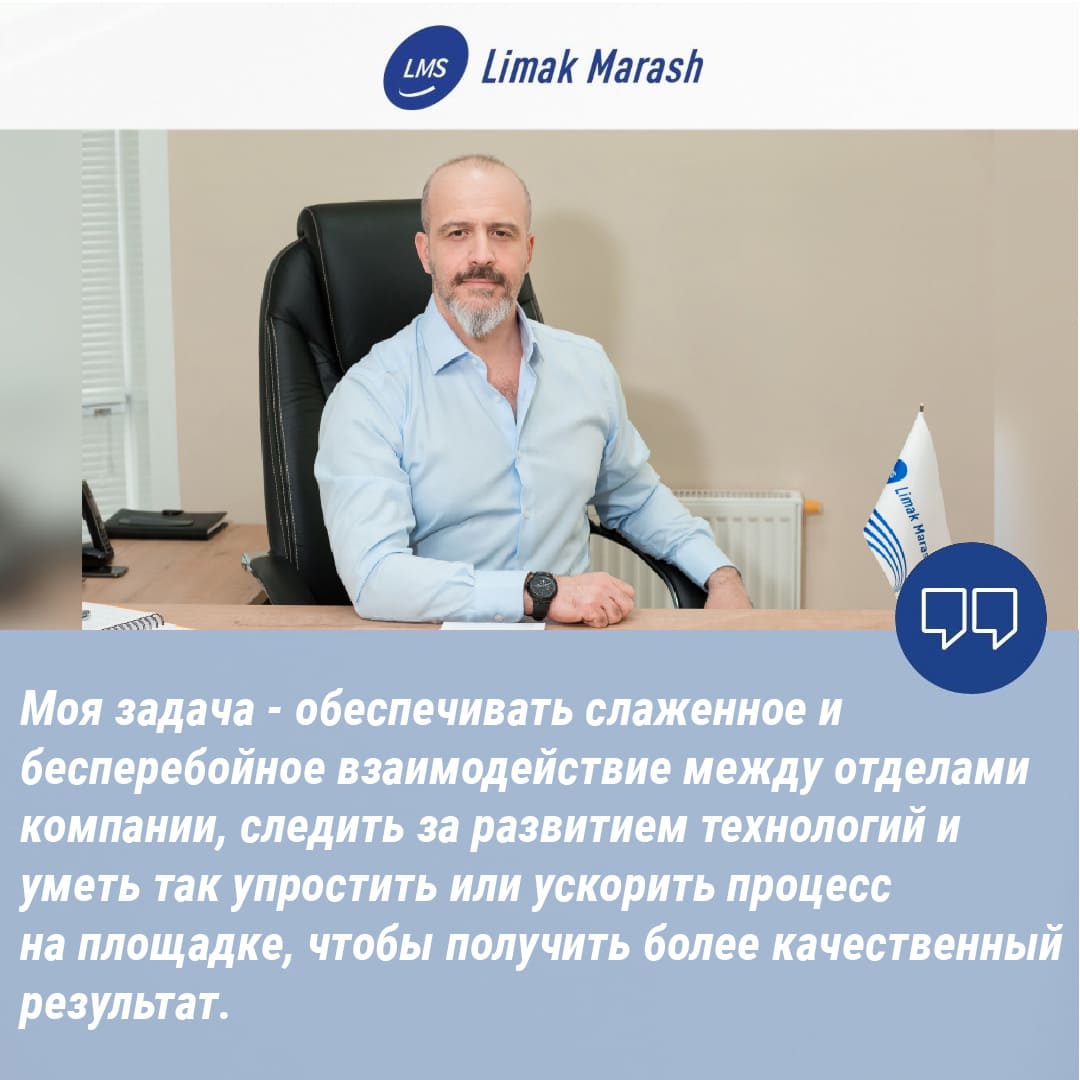